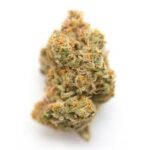 Buy God’s Green Crack Strain Online .God’s Green Crack is a balanced hybrid strain which lightens the heavy effects of God Bud with a high-flying Green Crack sativa. The indica and sativa parents work together to deliver a duality of head and body effects that lift the mood while relaxing muscles. Patients looking to alleviate stress and depression will especially find this strain useful. Its buds take on a deep purple coloration toward the end of its maturation, especially when raised in lower temperatures.

Like a bolt out of the blue, God’s Green Crack strikes users soon after they’ve toked on its heavy, aromatic smoke. At first, the strain may exert twitchy effects in the head like an increase in salivation or a throbbing in the temples. These tics subside soon after they’ve arrived, though, and are followed up by a surge in the intensity of the smoker’s thought processes. Certain concepts may seem more fascinating than they otherwise would, while the user’s train of thought it likely to amble around following from one free association to the next. For properly focused and motivated users, these buzzy properties can encourage productivity on work, whether your to-do list includes demanding, analytical tasks or mundane chores. God’s Green Crack can also stoke the fires of creativity, making it useful to those working on open ended personal projects.

Less than an hour after this high has kicked in, though, smokers should plan to be as relaxed as physically possible. Green Crack God weighs down consumers’ limbs and eyelids in equal measure, rendering any physical exertion very difficult. At this stage, the bud is well-suited to passive activities like snacking and binge-watching, as smokers give themselves over the flow of their immediate surroundings.

The versatile, multi-layered high that comes with Green Crack God can have a range of uses for medical cannabis patients as well. Those with attention deficit disorders may benefit from the strain’s early cerebral properties. Its glow of euphoria, meanwhile, can help to temporarily lift the fog of conditions like stress, depression, PTSD, and anxiety. On the physical end of the spectrum, this bud’s deeply relaxing vibes may soothe aches and pains, whether they’re temporary or chronic, as in the case of conditions like lupus or arthritis. Its tendency to bring about the munchies can even work as an appetite stimulant for those with impaired hunger due to harsh medications or treatments. Because of its sheer intensity, both mental and physical, God’s Green Crack is not recommended for patients who are prone to panic or paranoia.